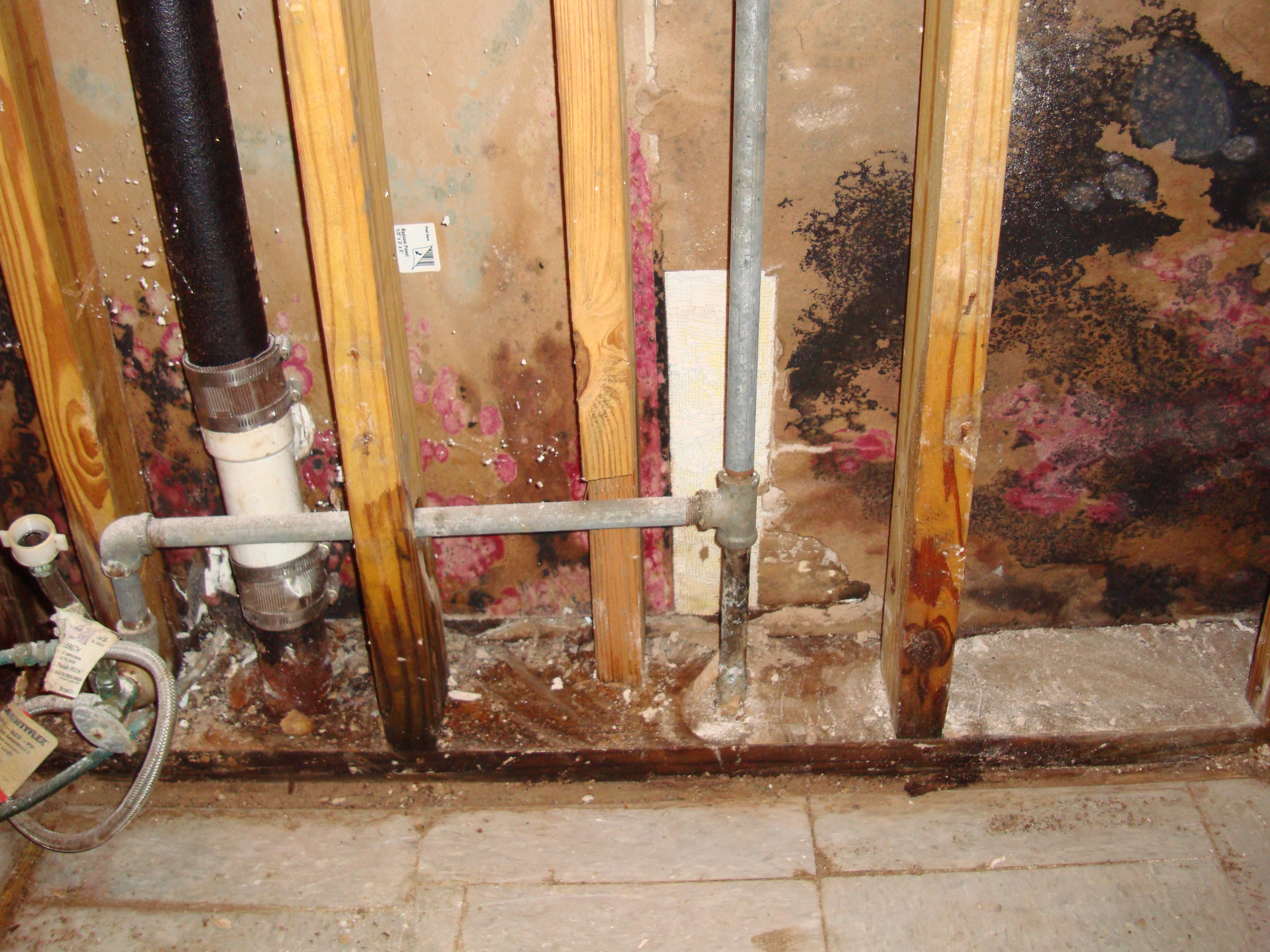 The presence of mold contamination indoors should not be taken lightly.  Individual mold spores are microscopic and not visible to the naked eye.  By the time you can see just one square inch of growth, there could be millions of mold spores in the colony.  Given the right conditions, these spores can contaminate the entire building, potentially causing adverse health effects and future problems such as deterioration of building materials.

When mold remediation is performed, it is important that engineering controls are used to prevent cross-contamination and protect the occupants.  For example, if mold is disturbed and engineering controls are not in place, the spores can easily enter the HVAC system and spread throughout the building.  When mold spores are disbursed, they lie dormant until the conditions are right.  Excessive humidity or moisture from a water loss can cause these spores to proliferate, causing rapid damage to building materials while further increasing health concerns.

When handled carefully by a knowledgeable professional, however, mold contamination can be remediated, and the building can be returned to a healthy state. Let’s discuss some of the engineering controls frequently used when performing mold remediation properly.

Containment can range from something as simple as covering an affected area of drywall with plastic, to as extreme as containing the entire building using air lock chambers.  We classify containment types into 3 different categories: source containment, localized containment, and full containment.

Source containment is used when there is minimal mold growth on the surface of a wall or other building material.  It involves sealing the visible mold growth to the building material, creating a barrier which prevents spores from releasing into the air during demolition, thus decreasing the chance of cross-contamination.

Common methods of source containment include plastic sheeting, tape, and adhesive, or other specialized products which adhere directly to the surface.  The problem with using this method is that the building material being removed likely has contamination on the back side that is not visible while in place and cannot be contained until the material is removed.

Think about seeing some drywall with a minor amount of mold contamination on the surface.  Many times, the area you see is much less than what is on the back side of the drywall inside the wall cavity.  The framing and insulation behind the drywall may also be affected and can release mold spores when the building material is removed.

If a company is recommending source containment as the sole type of containment for surface growth, they should verify that there is no contamination hidden behind the visibly affected building material.  This can be confirmed with a specialized camera used to look inside the wall cavity, or by testing the space and surfaces inside the wall.

This type of containment will seal a single room or area from the remainder of the building.  It typically includes the construction of heavy-duty plastic walls either across doorways or constructed around the area of contamination.  This allows room for workers to access the contaminated area while preventing mold spores and dust from escaping the containment during removal and cleanup.

The means of entry and exit must also be taken into consideration.  If damaged building material or workers must travel through other parts of the building in order to enter the contained area, a clean room air lock chamber should be established.  This air lock chamber will typically be a small room constructed outside of the contaminated area that the workers will enter and exit from.

The purpose of the clean room is to ensure that the contaminants are not tracked through the building from either the restoration workers or contaminated building materials. It is used to don and doff PPE, clean equipment used during remediation, and to clean any bags that contain contaminated building material.  The clean room should be HEPA vacuumed frequently during remediation and might also contain a HEPA air scrubber to constantly be cleaning the contaminants out of the air, and sticky mats at exits to make sure that nothing is tracked through unaffected areas of the building. 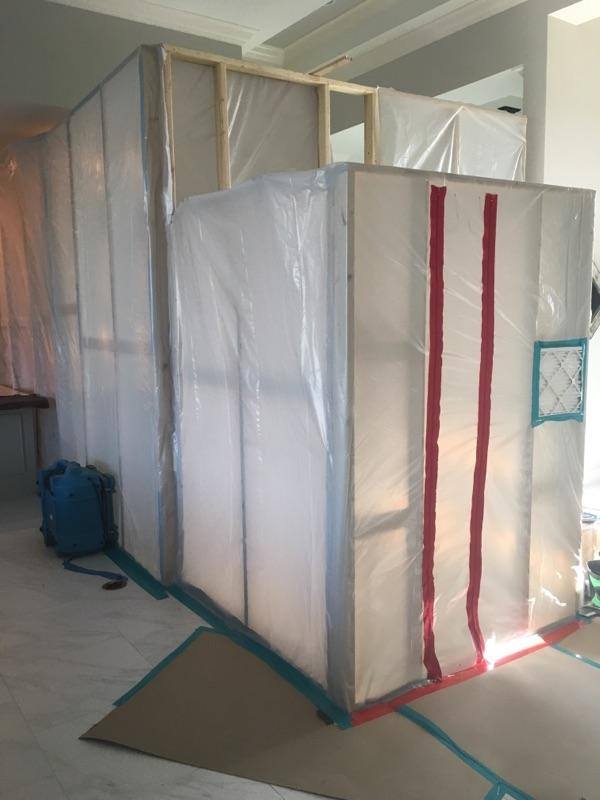 This is used on large remediation jobs that have extensive condition 2 and/or 3 areas throughout the building.  If the entire building is severely affected, then a full containment might consist of simply containing all the HVAC vents throughout and containing any entrances and exits.

Each of these containments can, and oftentimes should be used together. If the entire building is affected, a full containment may be used along with several localized containments to separate rooms and source containment set up on the visible growth. This can help to minimize the chance of cross-contamination while remediation technicians work on each individual room.  This also will allow for the licensed mold assessor to test individual areas once they have been remediated.  If a single area fails the post remediation verification test, then the mold remediator can work on correcting a single area rather than the entire building, saving time and money.

This is the process of manipulating the air pressure in a room to further minimize the risk of cross contamination.  Typically, HEPA filtered air scrubbers or air filtration devices (AFDs), are to create negative air pressure.  This is achieved by directing filtered air out of the containment, causing the air to be sucked out of the room.  The air being sucked out needs to be replaced, however, with new, clean air that is also filtered from outside or a clean part of the building. By utilizing this technique, we are constantly introducing clean air into the contaminated room while filtering out excess contaminants to avoid an overload of potentially hazardous particles.

The remediator must be careful when utilizing negative air and must be sure of where the make-up air is coming from.  For example, if there are open sewer lines nearby, the air quality can diminish quickly as methane gas and other contaminants are sucked out of the sewer lines.  Also, if natural gas or propane is used in the building, care must be taken to avoid filling a room with flammable gas.  Further caution must be taken monitoring the make-up air to make sure there are not contaminants being pulled from a separate contaminated area, be it a crawlspace, attic, an adjacent unit in a multi-unit building, or even a janitor’s closet. 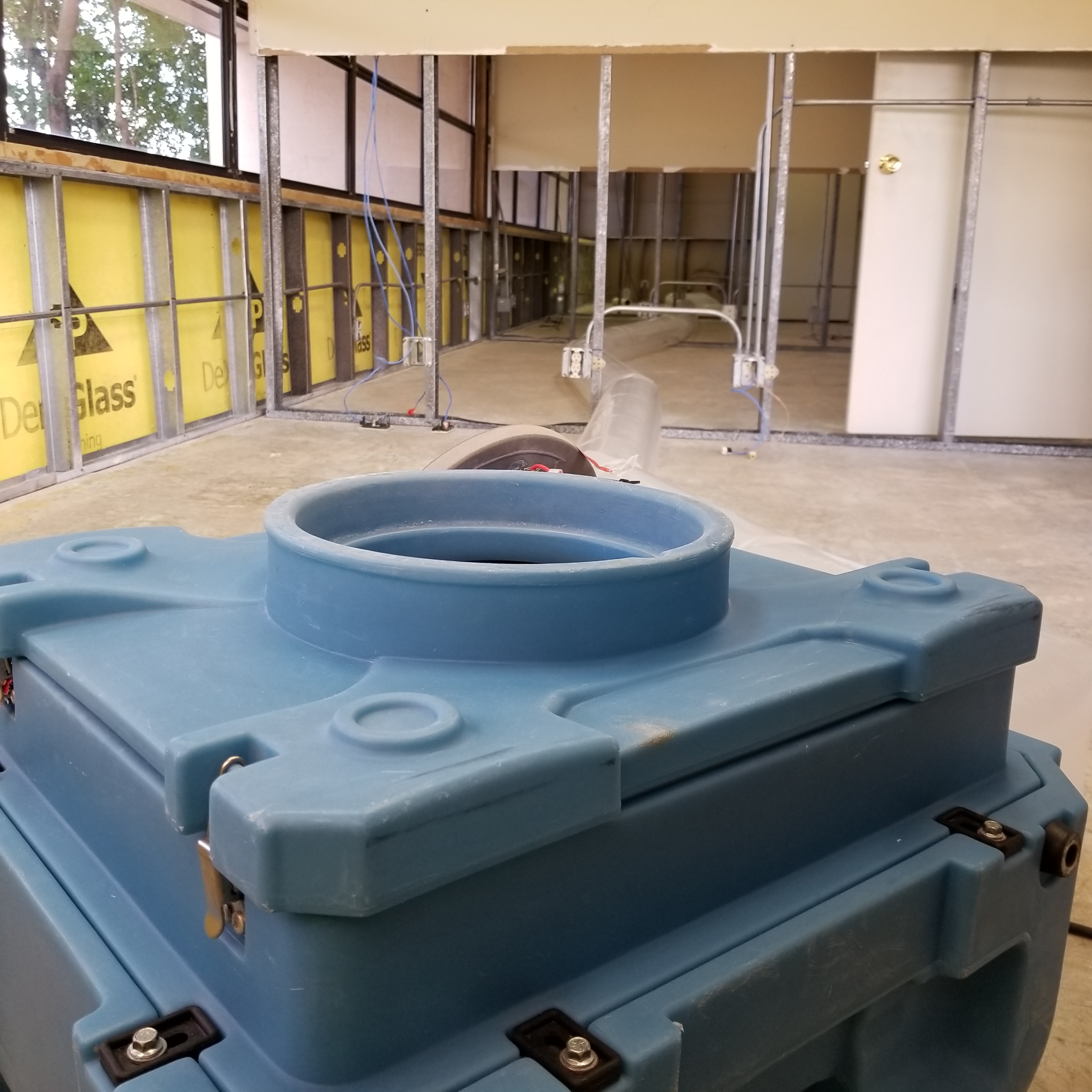 The remediator should be skilled in controlled demolition to minimize the spread of contaminants.  There are an assortment of demolition tools including saws and sanders that can be attached to a HEPA filtered vacuum to assist with this part of the process.  Further the remediator can utilize a source containment and put additional plastic over non contaminated contents and floor coverings.

Building materials should be carefully removed and not ripped, smashed, or crushed.  When using these specialized tools the demolition process may take slightly longer, but the clean-up process is drastically shortened, the project will have a higher success rate, and the cost is ultimately lower.

High relative humidity above 60% can be enough of a moisture source for some types of mold to grow and proliferate.  It is very easy for an indoor environment to reach this high humidity during remediation due to the HVAC system being shut down or covered and protected.  Dehumidifiers, or other versions of climate control including portable HVAC systems, can and should be added to the containment to ensure that new growth does not occur.

It is also important to use climate control in the remainder of the building outside of containment if the HVAC system is not running.  Daily checks of ambient readings should be completed to ensure that the relative humidity is acceptable, and immediate adjustments should be made if it is too high.

At Flood Zone Disaster Recovery Solutions, all our mold specialists are fully trained on these engineering controls and much more.  Containment is something that is not viewed as optional but mandatory, and we use these HEPA filtered air scrubbers, dehumidifiers or portable HVAC systems, dustless demolition tools, and HEPA filtered vacuums on every project. This gives us the highest chance of success on mold remediation projects and ensures we are protecting the building occupants.